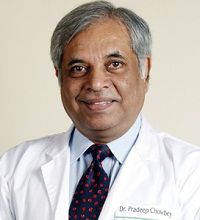 He has been the :

The first person to perform Laparoscopic cholecystectomy in Sri Lanka.

The first person to perform simultaneous Laparoscopic splenectomy on a patient scheduled for renal transplant with ITP.

Dr Chowbey was one of the few surgeons to recognize and acknowledge the increasing prevalence of obesity in India.

He has performed more than 70,000 surgeries till date.

He had been invited by various prestigious organizations & foundations in the country & abroad to deliver many orations, key- note addresses and guest lectures.

He has represented India as Governor to the Society of Endoscopic & Laparoscopic Surgeons of India (ELSA).

Dr Chowbey has been awarded Doctor of Science (Honoris Causa Doctorate) by His Excellency Governor of MP and the Vice-chancellor of the University of Jabalpur.

He is an Advisor to various Government bodies and universities to provide expertise and facilities of minimal access surgery including procurement of medical equipment for the medical institutions & hospitals.

Dr Chowbey has been honored with the Padmashri Award by President of India.

Check out other leading Laparoscopic, Bariatric and Weight Loss Specialists in India…Click Here