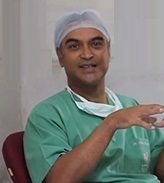 Arun Prasad is a medical graduate from the prestigious Armed Forces Medical College, Pune. He did his masters in surgery from Maulana Azad Medical College, New Delhi in 1988 and went to the UK for higher surgical training in GI surgery. Thereafter doing FRCS in 1990, he worked at Charing Cross Medical School, London and associated hospitals. Laparoscopic surgery was started by his team at that hospital. On his return from the UK in 1996, he joined Apollo Hospitals as one of the youngest senior consultants and worked there for 22 years contributing to the success of the institution in New Delhi. He then joined Manipal Hospitals as Head of Department of Surgery and Chief of Surgical Gastroenterology and Bariatric Surgery. Also Senior Laparoscopic, VATS & Robotic Surgeon. He is one of the pioneers of Minimal Access Surgery (Advanced & single-incision laparoscopy, Thoracoscopy, Bariatric Surgery and Robotic Surgery) in India with one of the largest experience in India of robotic gastrointestinal surgeries and particularly robotic bariatric surgery. He is President of the Obesity Surgery Society of India (OSSI ). He has experience of over 10,000 minimal access surgeries. He has many international publications in peer-reviewed journals describing techniques and results. He has been the vice president of national laparoscopic and national obesity surgery associations of India. He is a teacher and examiner of post graduates (DNB, FRCS, MRCS) and adjunct professor of surgery.

Check out other leading Laparoscopic, Bariatric and Weight Loss Specialists in India…Click Here