Why you should choose India for Affordable, World Class Pancreatic Cancer Treatment

World’s Lowest Cost Cancer Treatment Packages. Best quality Drugs, Medicines and Consumables for Pancreatic Cancer Care are produced in India at lowest cost and exported all over the world.

The classic Whipple procedure is named after Allen Whipple, MD, a Columbia University surgeon who was the first American to perform the operation in 1935. 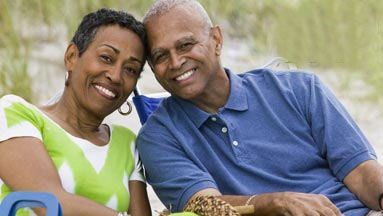 The goal of the Whipple procedure (pancreatoduodenectomy) is to remove the head of the pancreas, where most tumors occur. Because the pancreas is so integrated with other organs, the surgeon must also remove the first part of small intestine (duodenum), the gallbladder, the end of the common bile duct and sometimes a portion of the stomach. In the reconstruction phase of the operation, the intestine, bile duct and remaining portion of the pancreas are reconnected.

Pancreas is a spongy, leaf-shaped gland that is about 6 inches long and 2 inches wide. It lies in the back of the abdomen, behind the stomach and above the small intestine. The major function of the pancreas is to secrete hormones and enzymes. These hormones are insulin and glucagon, which help to keep the blood sugar levels normal. Enzymes help break down food. Pancreatic enzymes help the body digest fat.

A Whipple Operation is Performed For : 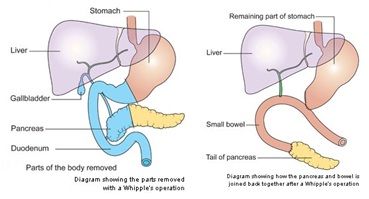 In a standard Whipple procedure, the surgeon removes the head of the pancreas, the gallbladder, part of the duodenum which is the uppermost portion of the small intestine, a small portion of the stomach called the pylorus, and the lymph nodes near the head of the pancreas. The surgeon then reconnects the remaining pancreas and digestive organs so that pancreatic digestive enzymes, bile, and stomach contents will flow into the small intestine during digestion.

A laparoscopic Whipple procedure may be offered to select individuals.

The laparoscopic Whipple procedure is performed through six small incisions in the abdominal wall. A laparoscope, a long thin tube with a lighted camera at its tip, is inserted through one incision. The surgeon operates using specially designed surgical instruments placed through the remaining incisions, guided by the laparoscope images shown on a monitor in the operating room.

Laparoscopic Whipple surgery usually takes four to five hours. Most people leave the hospital in four to six days, compared with eight to 10 days for those who have conventional surgery.Get Estimate

Effect of Whipple Operation on Diabetes

Follow up Care Required as It is a Highly Specialized Procedure 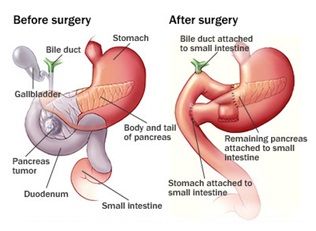 The Whipple procedure is a difficult and demanding operation for both the person undergoing surgery and the surgeon. The surgery usually lasts between 5-8 hours. The patient needs to stay in the hospital for at least seven days.

The patient might have a decreased appetite after the operation. The body will not be able to digest fats as effectively, so one needs to take medication every time he eats. Another common problem patients experience after surgery is fatigue, which usually lasts for few weeks.

Whipple surgery is a complex surgery that requires great expertise on the part of the surgeon and hence is categorized as a highly specialized procedure.Get Estimate

Ms Cheryl Campbell from USA shares her experience of travelling to India for Medical Treatment.

My husband and I have experience of hospitals both in the US and UK. Finding safemedtrip.com has been a boon. The hospital in India is overall the very best we have experienced. The level of care is exceptional.

Every member of staff works as a dedicated member of a team to assist recovery. We were somewhat nervous about coming to India as we have never visited before, but we were never left unsure or uncomfortable about anything from the time we were picked up at the airport. The medical facilities and the room facilities were equally excellent. We informed about every step which made us feel in control of our situation. The staff was extremely forthcoming and communicative. A special word of thanks, to the Physiotherapist, who worked hard and motivated me to get back on my feet again without any pain. Were any of our family to need surgery again, with time to make a choice we would come here.