Why you should choose India for Affordable, World Class Esophageal Cancer Treatment

World’s Lowest Cost Cancer Treatment Packages. Best quality Drugs, Medicines and Consumables for Esophageal Cancer Care are produced in India at lowest cost and exported all over the world.

Esophageal cancer is a disease in which malignant (cancer) cells form in the tissues of the esophagus.The esophagus is a hollow tube that carries food and liquids from your throat to your stomach. Early esophageal cancer usually does not cause symptoms. However, as the cancer grows, symptoms may include painful or difficulty in swallowing, weight loss and coughing up blood. Risk factors for developing esophageal cancer include: 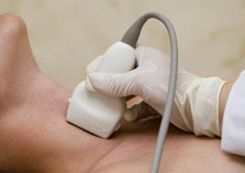 How are Esophageal Cancers Diagnosed? 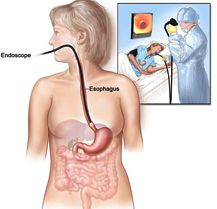 • Barium Swallow with X-ray : In a barium swallow, patients swallow a special liquid containing barium that coats the esophagus.

• Upper Endoscopy : In an upper endoscopy, a thin, flexible, lighted tube, called an endoscope, is guided into the mouth and throat, then into the esophagus. The endoscope allows the physician to view the inside of the esophagus, as well as to insert instruments through the scope for the removal of a tissue sample for biopsy.

• Endoscopic Ultrasound (EUS) : EUS is a test that helps physicians determine the extent to which tumors have penetrated the esophagus and nearby lymph nodes.

• CT : A CT scan is a noninvasive imaging test that combines X-rays and computer technology to produce images of the body. In addition to showing tumors of the esophagus, a CT scan can assist doctors in determining if the cancer has spread into other organs, such as the lungs or liver.

• PET : PET is a sophisticated, noninvasive imaging test that measures the metabolic activity of cells. PET aids physicians in finding cancerous tissue that may not show up on X-rays or other tests.

• Biopsy : The removal of cells or tissues so they can be viewed under a microscope by a pathologist to check for signs of cancer. The biopsy is usually done during an esophagoscopy. Sometimes a biopsy shows changes in the esophagus that are not cancer but may lead to cancer.

Treatment of Esophageal Cancer at World Class Hospitals in India 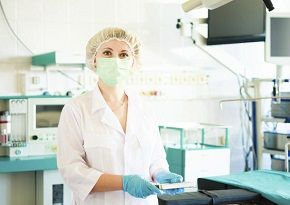 • Radiation therapy : The use of high-energy rays to damage cancer cells, stopping them from growing and dividing. Like surgery, radiation therapy is a local treatment that affects cancer cells only in the treated area. Radiation can come from a machine (external radiation) or from a small container of radioactive material implanted directly into or near a tumor (internal radiation).

• Photodynamic Therapy : A form of treatment that uses a photosensitizing agent, administered by mouth or intravenously, which concentrates selectively in certain cells, followed by exposure of the involved tissue to a special light (such as laser or ultraviolet light), in order to destroy as much of the abnormal tissue as possible. For example, photodynamic therapy is used to treat some forms of cancer and psoriasis.Get Estimate 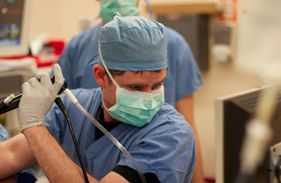 For some early (small) cancers, the esophagus can be removed through several small incisions instead of 1 or 2 large incisions. The surgeon puts a scope (like a tiny telescope) through one of the incisions to see everything during the operation. Then the surgical instruments go in through other small incisions. In order to do this type of procedure well, the surgeon needs to be highly skilled and have a great deal of experience removing the esophagus this way. Because it uses smaller incisions, minimally invasive esophagectomy may allow the patient to leave the hospital sooner and recover faster.

Occasionally, the surgeon is unable to do the procedure laparoscopically and must convert to open surgery in order to make it safer for you. In this case, you will have an incision in the middle of your abdomen and your recovery will be longer. To help prevent blood clots from forming in your legs during and after surgery, sequential compression stockings may be applied.

What is the Benefit of Minimally Invasive Esophageal Cancer Surgery?

Once you have decided that you want to get treatment in India you can email us your latest medical reports and accompanying X-Rays, MRI Scans and other relevant medical documents at [email protected]afemedtrip.com or Call or WhatsApp us on +91-9899993637 for one to one discussion with our executives.

Mohamud Abdi Ahmed from Somalia shares his experience of travelling to India for successful Cancer Treatment.

I have been suffering from various health issues for last five years and local doctors could only provide me symptomatic relief with various medicines. Then I decided to go online and found such an informative website safemedtrip.com and posted my message.

I followed their advice for planning a visit to India for a detailed medical examination. SafeMedTrip’s Case Manager was most helpful and guided me step by step to apply for India visa and make arrangements to fly to India.

I was received at the Delhi Airport though my flight got late and all hospital and test appointment were made and in just 2 days I had a clear picture of my medical issues and treatment plan. Now just 2 weeks later, I am so happy to have recovered and leaving for home. Thank you all and God bless you!