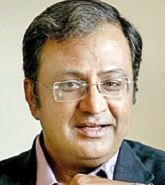 Dr K Sridhar is a senior neurosurgeon of Chennai with more than 30 years in the field of neurosurgery. He is recognised as an accomplished and extremely skilled microsurgeon. He has pioneered spine surgery and skull base surgery. Having performed more than a 1000 complex Brain Tumour surgeries his focus is currently on lesions in the Brain Stem and in functionally eloquent areas of the brain.

He has been a teacher for most of his neurosurgical career and is known for his Hands on Microneurosurgery workshops. He has been an associate editor of the Textbook of Neurosurgery and the Editor of the Textbook of Operative Neurosurgery, apart from being on the Editorial Board of many Neurosurgical Journals. He is known for his organisational capabilities and his building of a Neurosciences Team that can provide all round comprehensive care for neuro patients. He believes in the motto : “Together We Can” and is driving the concept of “Integrated Neuro Care” at the Institute of Neurosciences and Spinal Disorders at the Gleneagles Global Hospitals.

Check out other leading Orthopedic Specialists in India…Click Here