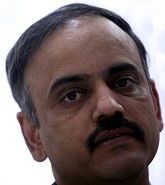 Dr. Sandeep Guleria has recently joined Indraprastha Apollo hospitals, New Delhi as a Senior Consultant Surgeon in General Surgery, GI Surgery and Transplantation. A distinguished alumnus of University College of Medical Sciences (UCMS), Dr. Guleria started his career at the Department of Surgery at All India Institute of Medical Sciences (AIIMS). He undertook advanced training in the U.K. where he was later appointed as a consultant surgeon in surgery and transplantation at St. James’s University hospital, Leeds, Europe’s Largest teaching hospital. He has spent a considerable part of his career in the academia at the Department of Surgery in AIIMS. His areas of specialisation include kidney transplants, dialysis, renal transplants and URS (therapeutic).

He is currently the vice president of the Indian Society of Organ Transplantation, and a member of the ethics committee of the Transplantation Society. Dr. Guleria has pioneered many path-breaking surgeries during the course of his career. He led the teams that performed the first cadaveric renal transplant in India from a brain dead donor, as also the first two successful kidney pancreas transplants in the country. Dr. Guleria has been actively involved in bringing modifications to the Human Organ Transplant Act through the Rajiv Gandhi foundation. The laparoscopic donor nephrectomy programme by the military academy was set up under his guidance. His contributions towards medical science have been recognised through numerous awards, including the Exemplary Contribution Award by the Indian Medical Association in 2008. Over 106 indexed publications highlight his work and efforts towards developing novel and efficient surgical practices.