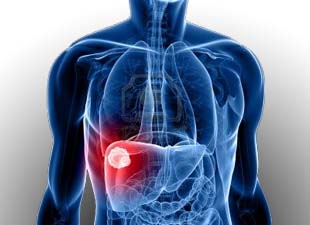 Liver cancer is cancer that begins in the cells of your liver. Your liver is a football-sized organ that sits in the upper right portion of your abdomen, beneath your diaphragm and above your stomach.

The most common form of liver cancer is hepatocellular carcinoma, which begins in the main type of liver cell (hepatocyte). Other types of cells in the liver can develop cancer, but these are much less common. Not all cancers that affect the liver are considered liver cancer. Cancer that begins in another area of the body — such as the colon, lung or breast — and then spreads to the liver is called metastatic cancer rather than liver cancer. And this type of cancer is named after the organ in which it began — such as metastatic colon cancer to describe cancer that begins in the colon and spreads to the liver. 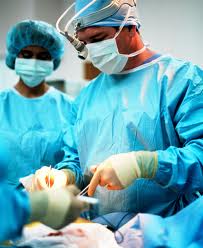 Surgery – Newer techniques are being developed to make both partial hepatectomy and liver transplants safer and more effective.

Adding other treatments to surgery – An active area of research uses adjuvant therapies – treatments given right after surgery – to try to reduce the chances that the cancer will return. Most of the studies so far using chemotherapy or chemoembolization after surgery have not shown that they help people live longer. Some promising results have also been seen with radioembolization, but these need to be confirmed in larger studies. Doctors are also studying ways to make more liver cancers resectable by trying to shrink them before surgery. Studies are now looking at different types of neoadjuvant therapies (therapies given before surgery), including targeted therapy, chemotherapy, ablation, embolization, and radiation therapy. Early results have been promising but have only looked at small numbers of patients.

Laparoscopic surgery – In laparoscopic surgery, several small incisions are made in the abdomen, and special long, thin surgical instruments are inserted to view and cut out the diseased portion of the liver. It does not require a large incision in the abdomen, which means there is less blood loss, less pain after surgery, and a quicker recovery. At this time, laparoscopic surgery is still considered experimental for liver cancer. It is being studied mainly in patients with small tumors in certain parts of the liver that can be easily reached through the laparoscope.

Liver transplant – During liver transplant surgery, your diseased liver is removed and replaced with a healthy liver from a donor. Liver transplant surgery is only an option for a small percentage of people with early-stage liver cancer. In most cases, transplant is used for tumors that cannot be totally removed, either because of the location of the tumors or because the liver is too diseased for the patient to withstand removing part of it. A major problem for patients needing a transplant is the lack of an available liver. Even for people who are eligible, there can be a long wait before a liver becomes available. Doctors are looking at using other treatments, such as ablation, to help keep the cancer in check until a new liver is available.

RFA treatment for Liver Cancer – Radiofrequency hyperthermic tumor ablation (RFA) is used to treat liver cancer, as well as tumors that have spread to the liver from another part of the body, such as the breast, colon or lung. This procedure uses high-frequency electric current to heat and destroy the cancer cells. During the procedure, a surgeon inserts a thin, needle-like probe through the skin and into the tumor, guiding it into place with ultrasound or CT scans. Electrical energy is then passed through the tip of the probe, which heats and “melts away” cancerous liver tumors. Radiofrequency ablation therapy carries the lowest risk compared to other cancer cell ablation techniques.

Freezing cancer cells – Cryoablation uses extreme cold to destroy cancer cells. During the procedure, your doctor places an instrument (cryoprobe) containing liquid nitrogen directly onto liver tumors. Ultrasound images are used to guide the cryoprobe and monitor the freezing of the cells.

Heating cancer cells –In a procedure called radiofrequency ablation, electric current is used to heat and destroy cancer cells. Using an ultrasound or CT scan as a guide, your surgeon inserts one or more thin needles into small incisions in your abdomen. When the needles reach the tumor, they’re heated with an electric current, destroying the cancer cells.

Injecting alcohol into the tumor –During alcohol injection, pure alcohol is injected directly into tumors, either through the skin or during an operation. Alcohol causes the tumor cells to die.