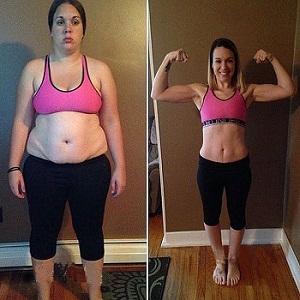 Megan Green was a typical American teenager. She loved fashion and socialising with her friends. But she always had trouble with her weight. She tried every diet, and went to the gym, but nothing seemed to work. Finally, she turned to surgery and has now lost 50lbs. Megan was 19 when she underwent a gastric band operation after tipping the scales at a dangerous 18st 5lbs – and joined a growing army of American youngsters going under the knife to beat obesity. At 5ft 4ins, Megan was desperate to lose weight because she could not be as active as her friends in her home city of Denver, Colorado. She even hired a personal trainer – before opting for surgery. She told Fox News: ‘I can’t move.  I can’t do anything.  I don’t feel young.  I feel old. I just always felt different. I’m just tired of being this way. The surgery, which consists of placing an adjustable band around the upper part of the stomach so that patients feel full up with less food, took only 14 minutes to carry out by the doctor. The latest research shows more and more teenagers are following  Megan’s example and turning to weight loss surgery.

A recent study conducted by the University of California, Los Angeles found that 590 youngsters between 13 and 20-years-old underwent gastric band or gastric bypass surgery between 2005 to 2007. Progress: She dropped 50 pounds in four months after surgery Eighteen per cent of the patients were under 18 and nearly 80 per cent were female. Dr. Bruce Wolfe, president of the American Society for Metabolic & Bariatric Surgery, said weight loss benefits and medical advancements are at least partially responsible for the rise. ‘The benefits of weight loss have in the last two years or three years shown to be quite substantial,’ he told the MailOnline. He added: ‘The safety of the surgery has been substantially improved over five to 10 years and research has shown that’s the case.’ The cost of the surgery averages around $17,000. Insurance is available for some because weight loss is proven to reduce risk of diabetes, hypertension, sleep apnoea, reflux, high cholesterol and joint pain. In India the Cost of Weight Loss Surgery is about 6000 to 7500 US Dollars. Please see https://safemedtrip.com/medical-services/weight-loss-surgery-in-india.html Despite the potential health benefits, some criticise the method as too drastic for teenagers and fear they may be using it as a substitute for healthy habits. Weight loss surgery can cause serious complications, including infection, heart attacks, blood clots and death, according to the American Society for Metabolic & Bariatric Surgery.  But Miss Green’s parents have been supportive. Her mother Debby aid: ‘I just want her to be healthy. I’m just hoping this helps her and makes all of her dreams come true.’ After the operation, patients are still advised exercise regularly and stick to a strict diet of several small meals a day, or risk feeling sick due to the constriction of the stomach. Megan, who recently turned 20, has so far seen success. ‘I don’t feel as shy or as scared to go places and do things,’ she said. For further detailed information on Weight Loss Surgery  in India please log onto : https://safemedtrip.com/medical-services/weight-loss-surgery-in-india.html
Get Expert Opinion from India's Best Doctors.