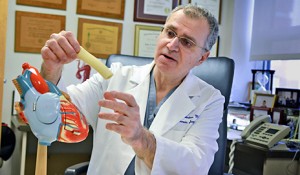 In a rare feat, doctors at a city hospital in New Delhi have performed a stitch-less valve replacement on a 54-year-old Fiji national.

According to the Chief surgeon, “He had been suffering from severe breathlessness and came with acute chest pain. Initial diagnosis revealed a diseased Aortic valve which had narrowed to the extent that the heart was having difficulty pumping blood through it and this placed considerable strain on his heart.” The doctors explained different options to the patient. However, the patient was well informed and opted for this suture-less valve replacement surgery.

According to the doctors this is a technologically advanced valve and introduced in India for the first time.

“This animal valve does not require any stitch. Firstly, this is placed on the delivery device which is placed in the position of implant after the diseased valve has been cut out. Subsequently, the delivery device is unscrewed to fit the artificial valve to its required position,” he explained. This process of implantation takes only a minute reducing the overall operating time considerably.

“This is a highly suitable technique for high-risk patients and will go a long way in addressing their problems. In non-operative techniques or TAVI, the valve can be implanted without surgery but the diseased valve remains inside so the chances of stroke and paralysis and other complications was higher, which is taken care of in this new technique as the diseased valve is removed and the implantation done under vision. This leads to improved results,” informed the Chief surgeon , CTVS at the hospital.