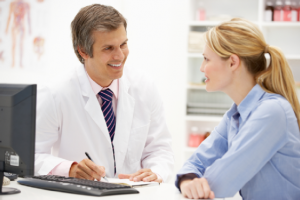 Sentinel lymph node biopsy is a surgical approach used for identification of specific lymph nodes that are called as sentinel nodes. The world sentinel means ‘sentry’ or ‘guard’. In cancer, a sentinel lymph node is referred to as a lymph node that receives lymph from the cancer in a patient and thus acts as a first site for spread of cancer to lymph nodes. 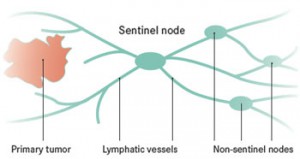 Sentinel lymph node biopsy is conducted using a combination of two techniques. We use blue dye and radioisotope. A special blue dye is injected in the breast at the time of surgery and lymph nodes in the axilla are identified by those that have taken up the blue dye. Such stained nodes are part of the sentinel lymph node group. Also, radioisotope labeled colloid is injected in the breast a few hours before surgery. Then, scanning of the patient is done using a gamma camera to look for uptake of radioisotope in the sentinel nodes. At the time of surgery, a special equipment called handheld gamma probe is used to identify such nodes in the axilla.

Thus, both dye method and radioisotope method are combined to get the highest accuracy rates for sentinel node identification. The sentinel nodes that have been identified are sent to the pathologist for immediate assessment using ‘frozen section’ testing. If there is cancer in these nodes, remaining nodes are removed. Otherwise, remaining nodes are not removed and patient does not have the risk of side effects of node removal.

What are the advantages and disadvantages of this procedure?

The advantages have been mentioned above. Main advantage is avoidance of unnecessary axillary dissection and its side effects.

Are there any specific guidelines associated with the use of this technique?

It needs to be highlighted that there are no Indian guidelines pertaining to sentinel lymph node biopsy. This, however, is in line with the general lack of Indian guidelines about all other issues that affect cancer care, including screening, prevention, treatment etc.

Sentinel lymph node biopsy is recommended for patients in whom lymph nodes in the axilla are not enlarged and felt on clinical examination. Internationally, it is recommended that a combination of dye method and radioisotope method should be used for best results. Further, each centre that is doing the procedure should do internal audit and keep monitoring its success rate. Proper training of persons practising this procedure is also important. Such training is acquired through conferences, workshops and visits to centres that are practising this procedure.The hospitals doing this procedure have  acquired hand held gamma probe, which allow the surgeon  to practice the combined approach.