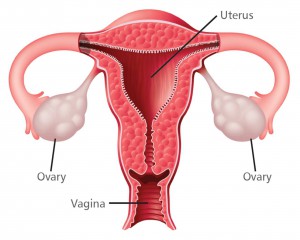 Ovarian cancer begins in a woman’s ovaries. The ovaries are glands that contain the germ cells or eggs. Every woman has two ovaries as part of her reproductive system, one located on each side of the uterus. They are almond shaped and about one and a half inches long. Every month, during ovulation, an egg is released from an ovary and travels to the uterus through a structure called the fallopian tube.Ovaries are the primary source of a woman’s sex hormones, estrogen and progesterone. These hormones influence breast growth, body shape, and body hair, and regulate the menstrual cycle and pregnancy. During menopause, the ovaries stop releasing eggs and producing sex hormones.

Ovarian cancer begins when normal cells in an ovary change and grow uncontrollably, forming a mass called a tumor. A tumor can be benign (noncancerous) or malignant (cancerous, meaning it can spread to other parts of the body). Removing the ovary or the part of the ovary where the tumor is located can treat a noncancerous ovarian tumor. An ovarian cyst, which forms on the surface of the ovary, is different than a noncancerous tumor and usually goes away without treatment. An ovarian cyst is not cancerous. Ovarian cancer can be difficult to diagnose at an early stage, largely because symptoms can be vague and similar to those of other common illnesses.

There are three types of ovarian cancer:

Germ cell tumor. This uncommon type of ovarian cancer develops in the egg-producing cells of the ovaries. This type of tumor is more common for women ages 10 to 29.

Stromal tumor. This rare form of ovarian cancer develops in the connective tissue cells that hold the ovaries together and make female hormones. 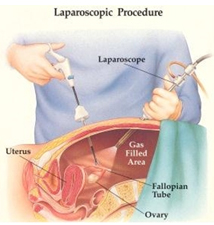 This is definitely the treatment of choice for early Ovarian cancer. The procedure is also useful in certain cases of recurrent Ovarian cancer that require extensive radical resection, including partial or complete exenteration or removal of the pelvic organs. If the tumor appears to be confined to the ovary, your doctor may recommend a minimally invasive procedure called laparoscopy for biopsy and tumor removal. It allows the surgeon to remove all or parts of your tumor using several small incisions rather than one large incision.

A thin, lighted tube with a camera at its tip (called a laparoscope) is inserted through a tiny incision in the abdominal wall. Guided by the highly magnified image generated by the camera, the surgeon can take a sample of the tissue using specially designed surgical instruments. Like the open surgical procedure laparotomy, laparoscopy can be used to stage (to determine the extent of the tumor) and to remove cancerous tissue.