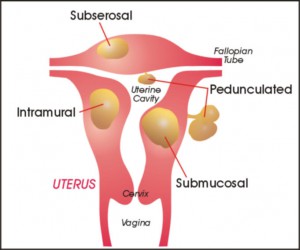 Uterine fibroids are noncancerous growths of the uterus that often appear during your childbearing years. Also called fibromyomas, leiomyomas or myomas, uterine fibroids aren’t associated with an increased risk of uterine cancer and almost never develop into cancer. As many as 3 out of 4 women have uterine fibroids sometime during their lives, but most are unaware of them because they often cause no symptoms. Your doctor may discover fibroids incidentally during a pelvic exam or prenatal ultrasound.

In general, uterine fibroids seldom require treatment. Medical therapy and surgical procedures can shrink or remove fibroids if you have discomfort or troublesome symptoms. Rarely, fibroids can require emergency treatment if they cause sudden, sharp pelvic pain or profuse menstrual bleeding. 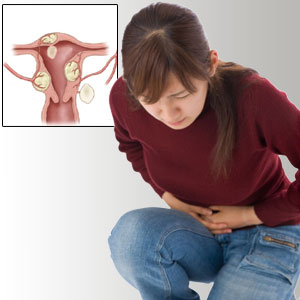 The most common symptoms of uterine fibroids include:

Family history is a key factor, since there is often a history of fibroids developing in women of the same family. Race also appears to play a role. Women of African descent are two to three times more likely to develop fibroids than women of other races. Women of African ancestry also develop fibroids at a younger age and may have symptoms from fibroids in their 20s, in contrast to Caucasian women with fibroids, in whom symptoms typically occur during the 30s and 40s. Pregnancy and taking oral contraceptives both decrease the likelihood that fibroids will develop. Fibroids have not been observed in girls who have not reached puberty, but adolescent girls may rarely develop fibroids. Other factors that researchers have associated with an increased risk of developing fibroids include having the first menstrual period (menarche) prior to age 10, consumption of alcohol (particularly beer), uterine infections, and elevated blood pressure (hypertension).

Estrogen tends to stimulate the growth of fibroids in many cases. During the first trimester of pregnancy, up to 30% of fibroids will enlarge and then shrink after the birth. In general, fibroids tend to shrink after menopause, but postmenopausal hormone therapy may cause symptoms to persist. Overall, these tumors are fairly common and occur in up to 50% of all women. Most of the time, uterine fibroids do not cause symptoms or problems, and a woman with a fibroid is usually unaware of its presence.

2. Requires only a tiny nick in the skin (No surgical incision of abdomen).

3. Recovery is shorter than from hysterectomy or open myomectomy.

4. Within 3 days patient can attend the job.

5. Virtually no adhesion formation has been found. But in surgery adhesions are common.

6. All fibroids are treated at once, which is not the case with myomectomy.

7. There has been no observed recurrent growth of treated fibroids in the past 9 years.

9. Many women resume light activities in a few days and the majority of women are able to return to normal activities (including exercise) within a week. If the presenting complaint was excess vaginal bleeding, 87-90% of cases experience resolution within 24hours.

10. Emotionally, financially and physically benign procedure -embolization can have an overall advantage over other procedures as the uterus is not removed.

To know more about “Fibroids Treatment” in India please check out this page  https://safemedtrip.com/medical-services/laparoscopic-minimally-invasive-surgery-in-india/fibroids-treatment-in-india.html