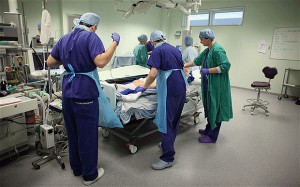 A new medical device offers an alternative to open surgery and drugs for the treatment of benign prostatic hyperplasia.

A new medical device offers a less invasive way to treat symptoms caused by an enlarged prostate. This walnut-sized gland in men sits below the bladder and surrounds the urethra, the tube that carries urine from the bladder out of the body.

As a man ages, it is common for the prostate to grow, a condition called benign prostatic hyperplasia (BPH). This rarely causes symptoms before age 40, but in older men the growing prostate can press on the urethra and reduce or block the flow of urine.

The UroLift system, a permanent implant that relieves, symptoms of an enlarged prostate in men 50 years or older.

Symptoms of an Enlarged Prostate

PH can lead to the retention of urine and strain on the bladder. Left untreated, this can cause urinary tract infections, damage to the bladder or kidneys, or difficulty controlling urine (incontinence).

A Less-Invasive Treatment for BPH

The UroLift provides a less invasive alternative to treating BPH than surgery. This device also may offer relief to men who cannot tolerate available drug therapies. The UroLift system relieves urinary symptoms by pulling back the prostate tissue pressing against the urethra. The tissue is held in place by a suture anchored to the inside and outside of the prostate. To deliver the suture, a surgeon inserts the UroLift device into the urethra through a rigid sheath. The tip of the device is positioned in the area of the obstruction and used to push the prostate tissue out of the way. At that point, the surgeon deploys a needle from the device to deliver the permanent implant. The number of implants depends on the shape and size of the obstruction caused by the enlarged prostate.symptoms of an enlarged prostate in men 50 years or older.

Procedure with the New Device

One of the main benefits of UroLift is that it offers men with BPH a less-invasive option than open surgery, with no incisions and no cutting or burning away of the prostate tissue. In addition, the results of the procedure can be seen immediately afterwards.

The procedure, which is done under local or general anesthesia, takes 66 minutes to perform on average. After treatment, men with the UroLift sutures had improved urine flow and were better able to empty their bladders. They also reported a decrease in their symptoms and an increase in their quality of life.

Benefits of the New Treatment

Other minimally invasive therapiesfor BPH also access the prostate through the urethra, making the UroLift system similar in this respect. The other procedures, however, involve cutting or burning away excess prostate tissue. UroLift uses only a needle and suture to pull back the prostate tissue.

UroLift is also less invasive than open surgery, a procedure that requires the surgeon to make an incision in the lower abdomen. Open surgery has a greater risk of side effects, but is generally only used for men who have a very large prostate, damage to the bladder, or complicating conditions such as bladder stones.