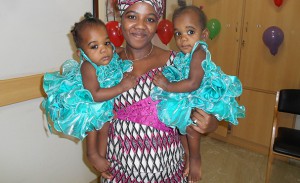 With great hope, a Nigerian mother had brought her 8 month old conjoined twins who were fused at the spinal cord, to our affiliate hospital a few months back. Back at home she had been told that to separate the two meant sacrificing one of the girls. The gritty young mother came to India a few months in search of more advanced facilities where SafeMedTrip affiliate hospital at Delhi helped her save the lives both her girls.

The surgeon who headed the team had never seen a case like this before and referred to the limited documented literature to guide him. After many sessions of brainstorming and clinical discussions with his 12 member team, a plan of approach was formulated. The entire surgery was meticulously planned on a dummy many times before they actually took the twins on the operation table. On the D-day, the wires and instruments used were colour coded to differentiate among the twins. Using 3D imaging techniques and technically superior instruments, slowly and steadily they traversed through the entangled nerves and vessels, cut separated and re-joined them separately to separate the twins. Parts of the body below the fusion were separated and restructured carefully. At the end of 16 hour long robot assisted surgery, the verdict was two completely stable healthy girls. 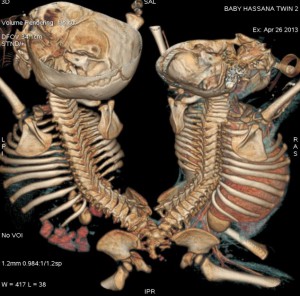 The grateful mother came to India with her daughters recently to celebrate the first birthday of her girls with the doctors who had carried out this surgery.

Badaru and his wife Malama Badariyya of Nigeria had lost all hope of saving their eight-month-old twin daughters, Hussaina and Hassana, who were born with their spinal cord fused together. The doctors in Nigeria had told them that they might have to sacrifice one daughter to save the other. Malama, however, had doubts if one twin would survive without the other. “I think it is one life governing the other. They cannot live without each other,” she told consultant paediatric surgery at SafeMedtrip affiliate Super Speciality Hospital in Delhi, where the couple took their daughters six months ago in the hope of seeing a miracle.

The surgeons had not handled a case like this before, so he was not too confident initially. But Malama’s concern for her daughters encouraged him to do research on the surgery. He found just four to five such documented cases in the world. So, he held a brainstorming with his colleagues.

The surgery was going to be a complicated one that involved life-threatening risks. Jain, however, decided to do it. With the help of modern 3D imaging techniques, Jain and his team of 12 doctors studied each vessel and nerve involved in the surgery. They rehearsed for hours on clay dummies.

On the day of the surgery, the monitors, wires and instruments to be used in the surgery were colour-coded. The surgery lasted 16 hours. The separation surgery took 12 hours and reconstructing the twins’ vagina, anus and rectum took another four hours.

Four months later, the girls returned to India to celebrate their first birthday with the people who changed their lives. They were cheerful and in perfect health. “Looking at them now, you cannot tell that they were joined once,” says a doctor, who was part of the team.

This is just one among the many success stories that are being written at SafeMedTrip affiliate hospitals across India.