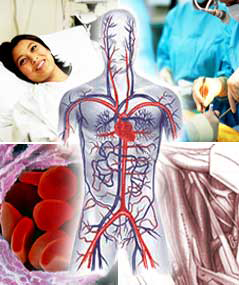 Vascular surgery deals with procedures performed on the major arteries of the body so that they can provide uninterrupted blood supply to all parts of the body. Blood carries oxygen to all cells and tissues of the whole body. Lack of blood results in reduced oxygen supply to the body tissues resulting cell death. Vital organs like brain and heart are greatly affected with even a little reduction in their blood supply and can present with symptoms of transient ischaemic attack (transient weakness in any part of the body lasting for less than 24 hours) or angina (chest pain due to lack of oxygen and blood to the heart). If blood supply to these organs is disrupted, it can result in stroke (paralysis of body due to lack of blood supply to the brain) or myocardial infarction/ heart attack (death of cells of the heart due to lack of oxygen).

The blood supply is affected in two major ways. Fatty deposit (plaque) on the inner walls of the arteries causes hardening of arterial walls and reduction in the lumen diameter of the arteries. (Atherosclerosis) This increases the work of the heart as it has to pump harder to overcome the resistance of the blood vessels. It also reduces the amount of blood flowing through the blood vessels. If this deposit increases to completely block the artery passage, there is complete stoppage of blood flow. The incidence of such events is increasing due to change in the lifestyle and faulty eating habits. (Oily/ fast foods).

Another mechanism by which blood supply is affected is due to aneurysms which may present along major arteries. Aneurysms are permanent abnormal dilatations of the blood vessels. This may happen due to infection/collagen tissue disease/sustained high blood pressure. This results in thinning and weakening of the arterial walls at the point of dilatation. There is always a danger of aneurysm rupture causing haemorrhage and disruption of blood supply. This event is generally fatal.

Two major surgical procedures have been developed to combat these problems: 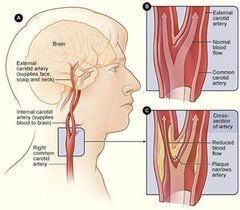 Carotid Endarterectomy (CEA) is a surgical procedure that is performed to remove deposits of fat, called plaque, from the carotid arteries in the neck. These two main arteries, one on each side of the neck, deliver blood and oxygen to the brain. Plaque builds up in large and medium-sized arteries as people get older, more in some people than others depending on lifestyle and hereditary factors. This build up is a vascular disease called atherosclerosis, or hardening of the arteries. When this happens in either one or both of the carotid arteries, become narrowed, a condition called stenosis. During a Carotid Endarterectomy, a surgeon removes the fatty deposits to correct the narrowing and to allow blood and oxygen to flow freely to the brain. The main intention of the surgery is to prevent a condition known as cerebrovascular accident or stroke. (identified as Hemiplegia). The surgery is generally performed as a lifesaving surgery in persons who have had episodes of TIA.

(Transient ischemic attack) or mild stroke. The symptoms of TIA last for less than 24 hours and may include numbness, muscle weakness, or paralysis of the face, arm, or leg, usually on one side of the body, and usually occurring suddenly, speech or vision difficulties, sudden loss of understanding, confusion, lightheadedness or fainting spells, loss of balance with difficulty walking and moving; poor coordination, severe headache with no obvious cause, either sudden or persistent. If these symptoms persist for more than 24 hours it is known as stroke. The presence of narrowed arteries can be diagnosed by tests such as Doppler imaging, magnetic resonance angiography or a CT scan.Get Estimate

The procedure is performed under general anaesthesia and takes about 1 hour. It is usually performed by a vascular or neurosurgeon with years of training in this procedure. During the procedure, a small incision is made in the neck below the jaw to expose the carotid artery. Blood that normally flows through the artery is rerouted via a shunt, in order to perform the surgery.

The carotid artery is opened and the waxy fat deposit is removed, sometimes in one piece. If the carotid artery is observed to be too narrow or too damaged to perform the critical job of delivering blood to the brain, a graft using a vein from the patient’s leg may be created and stitched (grafted) onto the artery to enlarge or repair it. The shunt is then removed, and incisions in the blood vessels, the carotid artery, and the skin are closed.

Aneurysms are abnormal dilatation that may be present along major arteries. The dilatations occur when the vessel walls get weakened at some point. Continuous high blood pressure increases the pressure on these weak walls which may cause them to burst and result in a hemorrhage. The aneurysms may be found in the major arteries in the brain (berry aneurysm) or in the aorta. The aorta is a major artery originating from the left ventricle of the heart. It carries oxygenated blood. All the arteries in the body are direct or indirect branches of aorta. The aorta traverses through the chest (thoracic aorta) and the abdomen (abdominal aorta). It then divides in to two main branches at the pelvis that supply the front and back of the legs and lower back.

Aneurysms can be slow growing, remaining symptomless for years. But some of them can be fast growing. They are more often seen in males above 55 years of age who suffer from long standing hypertension, diabetes and who smoke. There is a hereditary feature also. Rupture of aneurysm can be fatal if it occurs in anywhere in the brain or aorta. 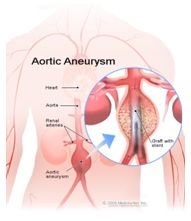 Persons suffering from bulging aortic aneurysm may present with pain in the chest in back along with strong pulse in the abdomen, feeling of fullness in the stomach with minimal food intake, nausea and vomiting. When the aneurysm ruptures it causes severe ripping chest pain, increased sweating, a fast heart rate, rapid breathing, dizziness, and shock . It is a medical emergency and requires immediate hospitalisation. A CT scan, MRI or chest X-ray can help in the diagnosis of this condition.

Open surgery is the accepted treatment for aortic aneurysms of the chest or abdomen. A large incision is made in the chest or the abdomen. Blood flow in the aorta is stopped by connecting the circulatory system to an outside pump (heart and lung machine). This machine circulates blood to the body and keeps the vital organs and other tissues oxygenated properly.

The damaged section of the aorta is removed and replaced by an artificial blood vessel (graft) made of cloth fabric. The graft is sewn in place. Although this surgery is usually successful, it has its own risks to the heart, brain, lungs, and kidneys. It also involves considerable recovery time because of the size of the incision and complex nature of the surgery. Usually a patient has to stay in the hospital for a week, and recovery time is at least 6 weeks. With certain lifestyle modifications and precautions the outcome of surgery is generally successful.

Why you should choose SafeMedTrip affiliated World Class Hospitals in India for Vascular Surgery ?

A successful vascular surgery requires an expert medical team – doctors (neuro/vascular surgeries), nurses, and other support staff – who are experienced in vascular surgeries, can promptly recognize problems and emerging side effects, and know how to react swiftly and properly if problems do arise.

A good vascular surgery program will also recognize the importance of providing patients and their families with emotional and psychological support before, during and after the surgery, and will make personal and other support systems readily available to families for this purpose.

All this is and more is provided at our affiliate hospitals. We make this difficult journey easy for the patient and his relatives.

What people say about us – Patient Experiences

I had so many apprehensions and concerns prior to coming to India for surgery that I needed badly to regain my health. “Thanks for your always prompt responses to my volley of questions and concerns. I could not have managed even a step without your staff’s excellent care. I couldn’t be happier with the Indian hospitals, surgeon, physicians and their expertise. Everyone is very professional yet compassionate. All staff nurses and doctors are very attentive. My stay during treatment in India was very comfortable