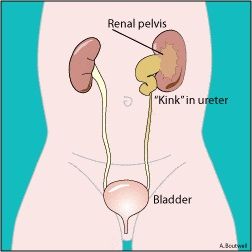 Pyeloplasty is a procedure to remove pelvic ureter junction obstruction.A kidney is made up of millions of small units called nephrons where the blood from the body is filtered and urine is formed. This urine from all the nephrons then drains into a triangular structure called renal pelvis from where it is carried to the bladder through thin tubes called ureters. At times the junction between the renal pelvis and the ureter gets narrowed or kinked and urine flow is obstructed.

As a result there is a buildup of urine in the nephrons, causing the dilation of renal pelvis, and the condition is known as hydronephrosis. This condition can be congenital. Pyeloplasty procedure helps to repair this obstruction and ensure smooth flow of urine.

• Open Pyeloplasty : This the most common traditional approach used in which the cut can be made in the lower back, just under the 12th rib, across the abdomen or in the flank region. In each case a long cut is made, the skin, intermediate tissue and muscles are cut till the kidney can be seen. Then the narrowed portion of the junction is cut and removed and the ureter is reconnected to the renal pelvis. At times a stent is placed in the narrowed part that keeps the area patent for easy drainage of urine. After the procedure, muscles, skin and other tissues are stitched up. Patient has to stay in the hospital for 3-4 days and the recovery period extends from 1 – 3 months.

• Robot Assisted Pyeloplasty : The da Vinci robotic surgical system has helped to overcome many of the challenges imposed by laparoscopy. Robotic surgery is similar to traditional laparoscopic surgery in that instruments are introduced into the body through several small incisions and manipulated under video guidance. Unlike conventional laparoscopy, in which the surgeon’s hands are directly linked to the instruments, in robotic surgery, the surgeon’s movements are made in a console that is remote from the patient and translated by the robotic arms. This procedure provides more freedom of movement to the wrist and less tremor which makes the suturing easy.

• Retrograde Endopyelotomy : The procedure is same as above except that instead of a nephroscope, a ureteroscope is used which is inserted through the bladder and guided up to the renal pelvis. The narrowed part is removed and the stent is place from the bladder to the pelvis. This procedure can be performed in an outpatient setting. 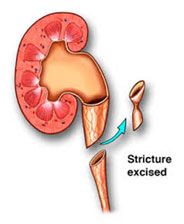 There are different types of Pyeloplasty :

• Laparoscopic Pyeloplasty : The procedure was first carried out in 1993 and since then has steadily gained popularity among patients and surgeons alike. The steps of the procedure are same as in open pyeloplasty except that small cuts and microscopic instruments replace the large incisions. Though the procedure requires advanced skills, the shorter hospital stay and faster recovery make it a more popular option.

• Percutaneous Antegrade Endopyelotomy : In this an incision is made directly over the region of upper pole of kidney. The nephroscope is inserted through the incision upto the renal pelvis and narrowed area. Micro instruments are then guided through the scope with the help of a camera and the narrowed portion is cut. The ureter and the pelvis are stitched up and a stent is positioned from the pelvis up to the bladder. The stent is kept in place for about 4-6 weeks. Faster recovery due to a small incision and lesser blood loss is the main advantage of the procedure.

"I had so many apprehensions and concerns prior to coming to India for surgery that I needed badly to regain my health. "Thanks for your always prompt responses to my volley of questions and concerns. I could not have managed even a step without your staff's excellent care...Read More"