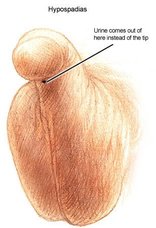 It is a relatively uncommon disorder of the external genitalia (3:1000 births), that involves incomplete closure of the urethral groove on the underside of the penis. Normally, the penis serves a dual role in males by providing a pathway for urine to exit the bladder and for semen to enter the vagina. Both tasks are facilitated when the urethral opening (meatus) is positioned normally at the tip of the head (glans) of the penis.

A genetic cause or an altered synthesis of testosterone (or its derivative) and/or an anomaly of the receptors for this hormone can be responsible for this condition.

The condition is detected at birth during the complete physical examination of the new born. The foreskin does not cover the tip of the penis completely and the opening of urethra can be located anywhere on the underside of the penis from the tip to the base. About 8 percent of boys with Hypospadias also have a testicle that is not fully descended into the scrotum. There may be other congenital abnormalities associated with this condition.

What are the problems with hypospadias?

Hypospadias is associated with several problems. The urine stream, instead of being directed forwards is usually deflected towards the feet so that these boys commonly soil their clothes and are unable to pass urine in a standing position. This, naturally, is a serious concern when the children enter school. A reasonably straight penis is essential for normal sexual intercourse. Although this may not be an immediate concern in the child, this is an important reason for these children to have their deformity corrected surgically.

When should the operation be done?

For the reason mentioned above, the surgical repair of hypospadias must be complete before the child starts going to school. Often, the operations are done in more than one stage. The time interval between two stages of operation is about 6 months. The first operation can be done at around 1 year of age. The paediatric surgeon, based on several considerations, ultimately takes the decision regarding the optimum timing of operation. 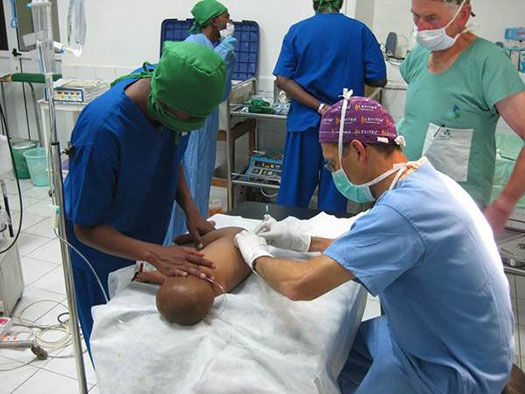 For a variety of reasons doctors prefer to do hypospadias surgery in full-term and otherwise healthy boys, between the ages of three and 18 months. Yet the repair can be corrected at any age in childhood and even into adulthood. Occasionally, when the opening is proximal, treatment with the male hormone testosterone prior to surgery may be recommended.

The goal of the surgery is to create a normal straight penis with a urinary channel that ends at the tip of the head of the penis. The operation usually involves four steps: straightening the shaft; creating the urinary channel; positioning the urethral opening in the head and either circumcising or reconstructing the foreskin.

Hypospadias repair is usually accomplished in a ninety-minute (distal) to three-hour (proximal) same-day surgery. In a few instances, however, it is done in stages, usually when a paediatric urologist wants to separately straighten the shaft before constructing the urinary channel. It can be done under general anaesthesia or spinal anaesthesia.

First degree hypospadias are primarily a cosmetic defect and have little effect on function except for direction of the urinary stream. If uncorrected, a second or third degree hypospadias can make urination messy, necessitate that it be performed sitting, impair delivery of semen into the vagina (possibly creating problems with fertility), or interfere with erections. In developed countries, most hypospadias are surgically repaired in infancy. Surgical repair of first and second degree hypospadias is nearly always successful in one procedure, usually performed in the first year of life by a pediatric urologist or a plastic surgeon.

If the penis is small, testosterone or human chorionic gonadotropin (hCG) injections may be given to enlarge it before surgery. Surgical repair of severe hypospadias may require multiple procedures and mucosal grafting. Circumcision should be avoided before repair.

Many surgeons prefer that their patient not urinate through the fresh repair during the first few days after surgery. So they leave a small catheter in the penis that drains into the diaper. Antibiotics, and sometimes bladder antispasmodics, are given while the catheter is in use.

Follow up visit schedule depends on the urologist. Complications like pain, bleeding and opening of sutures can be seen after the surgery.

What People say about us – Patient Experience

“I could not have managed even a step without your staff’s excellent care. Couldn’t be happier with the surgeon, physicians and their expertise. All staff nurses and doctors are very attentive. Always available, kind and considerate. Your Case Managers are very personable and professional. My stay was very comfortable. Will recommend for sure.

Thanks you all and God bless you ! “”