Oral and maxillofacial surgery is a branch of surgery to correct a wide spectrum of diseases, injuries and defects in the head, neck, face, jaws and the hard and soft tissues of the oral (mouth) and Cranio -maxillofacial region (jaw and face region). It is an internationally recognized surgical specialty. In most countries around the world, it is recognized as a dental or medical specialty.

OMF surgery is unique in requiring a dual qualification in medicine and dentistry, and is often seen as the bridge between medicine and dentistry, treating conditions that require expertise from both backgrounds such as head and neck cancers,salivary gland diseases, facial disproportion, facial pain, temporomandibular joint disorders, impacted teeth, cysts and tumors of the jaws as well as numerous problems affecting the oral mucosa such as mouth ulcers and infections.

More simply put, the oral and maxillofacial surgeon is the orthopedic surgeon of the facial region. He or she is an individual who addresses problems ranging from the removal of impacted teeth to the repair of facial trauma. 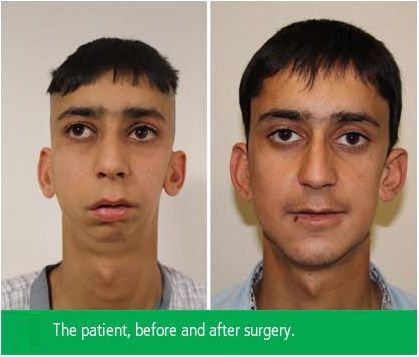 A 21-year-old patient from Kabul, Afghanistan, who was unable to open his mouth more than a few millimetres, was successfully treated by a team led by Maxillofacial Surgeon, at SafeMedTrip affiliated World Class Hospital in India.

The patient suffered from the classical Bird Face Deformity, which restricted his mouth opening to barely 10 mm, instead of the normal 35-40 mm. He had suffered a jaw injury as a child, which fused his jaw bone with the skull and made it immobile, leading to the progressive inability to open his mouth.

For all his life, 21-year-old Harman Abdullah had never tasted the delicacies like Yakhni pulao and Korma his mother cooked. This was not because he lived away from her, but because he could never open his mouth wider than a few millimeters to bite into them. Abdullah (form Kabul) presented our network hospitalwith Classical bird face deformity which restricted his mouth opening to barely 10 mm (against a normal 35-40 mm mouth opening).

Abdullah had a history of trauma to the temporo-madibular joint as a child (which fused his jaw into the skull and made it immobile), leading to progressive inability to open his mouth. He had been operated twice as a child back home to improve his condition but not much to his avail. Abdullah also had a severely retruded chin as his bone had not grown as any other normal child affecting his physical appearance. As a result, he could not completed his schooling and had no peer. Due to his condition, he could not maintain proper oral hygiene and was malnourished and weak in his overall well-being.

“It was one of the most challenging surgeries. During the two earlier surgeries – doctors had tried to separate the jaw from the skull but his condition only marginally improved. A 3D CT scan showed fusion of the lower jawbone to the skull, leading to the diagnosis of Bilateral Temporo- Mandibular joint ankylosis. The Maxillofacial Surgery was planned in two stages – improve mouth opening and improve aesthetic. The surgical phase was divided into 3 parts. In the first part Inter positional arthroplasty where a wide bony gap is created at the jaw joint region, with interpose local flap, followed by aggressive mouth opening exercise and physiotherapy was carried out. ‘Post this surgery, the patient was able to open his mouth to as wide as 35 mm much to his and his family’s disbelief. His mother wept,’ recalled the surgeon.

The second stage was carried out 6 months after the first surgery. This was the distractor placement and distraction phase – where the bone was divided at the mandibular angle region and gradually moved apart 1cm a day using a mandibular distraction device. ‘We achieved 20 mm of bone distraction by the end of a month,’ In the third and last stage which followed four months after the second surgery – called the consolidation phase- the distractor was removed and an advancement genioplasty was done to achieve results.

‘The total treatment time took one-and-a-half years from start to end and the patient visited the hospital thrice with and average hospital stay period 4 days each time and 1months in India . The patient has now returned to India for a medical follow up and a much-improved health and overall well-being. For more information on or Hand surgery please visit.

How Can You Get a Free Expert Opinion from Top Dental Specialists in India ?

"Got the metal free crowns done .I really liked the results & more importantly, how painless it was. I was very impressed with the friendly nature of the whole staff & doctors here in India. If anyone ever wants any kind of surgery to be done, just get in touch with Safemedtrip and they will take care of just about everything- that’s my recommendation" Thanks you all and God bless you ! -"