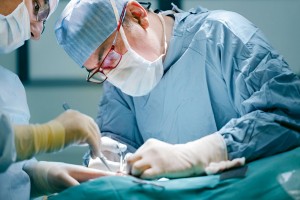 Doctors in the Capital successfully reconstructed the face of a person suffering from a rare nasal tumour, which threatened to wreck his face.

Sixty nine-year-old patient was pulled out of this crisis and given back his original look, in what the doctors termed massive and miraculous reconstructive surgery.

Doctors at the Hospital did get rid of the cancerous tumor, but this had to be done only after removing the skull bone and major facial bones. The face was reconstructed subsequently, retaining the original face, and a new life was given to him.

A team of skilled doctors at the hospital comprising surgeons from departments of surgical oncology, neurology, reconstructive surgery and anaesthesia achieved this feat. It took over 12 hours to remove the tumour and then reconstruct the face, retaining its originality.

Patient was admitted to the hospital in last week of May with complaints of bleeding from nose, headache, mild fever, post nasal discharge, swelling in the face area and eye enlargement.

Talking about the surgery Director & HOD, Surgical Oncology, at Hospital said, “MRI and biopsy revealed a rare type of cancer caused by secretory glands, in medical terms called Adenoid Cystic Carcinoma. It was also found that the cancer was spreading across the face making it very difficult in deciding where to begin the treatment. After consultation with other team members involving reconstructive plastic surgeon, head neck surgeon, neurosurgeons and anaesthetist, we decided to approach the tumour from both above and below the face. This gave better exposure, thereby ensuring complete tumour removal without producing damage to the brain, nerves and other major structures.”

Head & neck onco-surgeon, senior consultant surgical oncology, at the Hospital, said, “The resection involved removal of part of the maxillary bone, nasal bones, orbital bones and the anterior skull base areas together with the tumour in one piece, which left behind a gaping hole communicating between brain and oral and nasal cavities. This was a high risk surgery as it involved increased chances of brain infection, bleeding and leak of cerebrospinal fluid.”

“The approach to the tumour was made through first incision over the face and the second over the scalp. Part of the skull bone was initially removed to enter the brain, which was then replaced and fixed with screws at the end of the procedure”, said, Head of Neurosurgery.

Once the deadly tumour was removed, it was time to reconstruct his face and he was kept under the specialised care of the intensivist, added, Director& HOD, Surgical Oncology.

Then the final phase involved ‘plugging all the gaps and holes’ and giving a shape to the lost contour of the face. Patient was then taken over by, Onco-Reconstructive surgeon, Additional Director, Surgical Oncology, at the Hospital.

He said, “The reconstruction of these kinds of defects is challenging in order to maintain the original face. In this case, the cheek bones were reconstructed using Biopore, a linear, high-density polyethylene biomaterial which is biocompatible and porous. This is available in sheets which are carved in the required dimensions and shape to fit the defect properly. Besides using it for the reconstruction of the cheek bones, it was also used to form the nasal bone and also the walls of the orbit in which the eye globe was positioned at the level of the opposite eye thereby retaining a functional eye. The contouring with this material has been so aptly performed, that it may actually be difficult to distinguish the loss of bones in these areas. This reconstructed framework was then covered with a pericranial flap, a vascular flap taken from the top of skull bone.

Additionally a muscle from the temple was then used to reconstruct the cheek area and provide a barrier between the brain and oral and nasal cavities.”