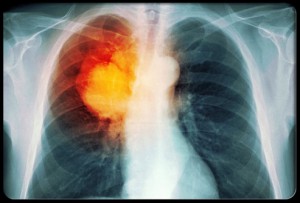 Lung cancer is a disease characterized by uncontrolled cell growth in tissues of the lung. If left untreated, this growth can spread beyond the lung in a process called metastasis into nearby tissue and, eventually, into other parts of the body. Most cancers that start in lung, known as primary lung cancers, are carcinomas that derive from epithelial cells. There are two major types of lung cancer: non-small cell and small cell. Non-small cell lung cancer (NSCLC) comes from epithelial cells and is the most common type. Small cell lung cancer begins in the nerve cells or hormone-producing cells of the lung. The term “small cell” refers to the size and shape of the cancer cells as seen under a microscope. It is important for doctors to distinguish NSCLC from small cell lung cancer because the two types of cancer are usually treated in different ways. Lung cancer begins when cells in the lung change and grow uncontrollably to form a mass called a tumor (or a lesion or nodule). A tumor can be benign (noncancerous) or malignant (cancerous). A cancerous tumor is a collection of a large number of cancer cells that have the ability to spread to other parts of the body in a process. A lung tumor can begin anywhere in the lung. 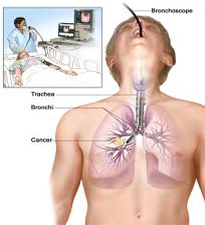 Minimally invasive surgical techniques have been developed to diagnose and treat lung cancer. These procedures are performed with the use of a video camera that is inserted through a small 3 inch incision of the chest. This enables the surgeon to clearly see the tissue being operated on without having to make a large incision in the chest and spreading the ribs . The minimally invasive technique can provide a more accurate surgery with less recovery time, less risk of infection, less bleeding and less discomfort than the traditional procedure. Benefits of Minimally Invasive Procedures Stereotactic body radiotherapy– this is a modification of radiotherapy. Treating lung cancer with conventional radiation is a burdensome process. Patients receive radiation therapy, which kills the cancerous cells and shrinks tumors, five days a week for six to seven weeks. The travel alone can be a hardship for patients not living in the city. In contrast, SBRT requires only three to eight treatments, not 35. Once malignancy is confirmed through a PET CT scan or biopsy, treatments can begin. Patients are placed in an immobilizing body frame to reduce movement so that doctors can focus radiation on the tumor while reducing exposure of healthy tissue.

Although both traditional treatments and SBRT methods involve radiation, SBRT administers large, highly precise doses instead of multiple smaller doses. For those who undergo SBRT, the expected survival range is more than 32 months. And depending on the size and seriousness of the tumor, the two-year disease free survival, or cure rate through SBRT increases to approximately 81 percent and can reach up to 98 percent, according to findings in the trials published in international oncology journal.

Molecular target therapy aims to improve symptoms and heal the disease by suppressing specific molecules that are involved in the development and progression of cancer. They use target drugs which will act specifically on the biological molecules that cause the progress and metastasis of the disease. Since these drugs block only the cancer cells it is believed that they do not cause the usual side effects as caused by cytotoxic chemotherapy drugs that affect healthy cell also. But the target therapy has its own set of complications and therefore requires more set of trials before they get a food and drug authority approval.