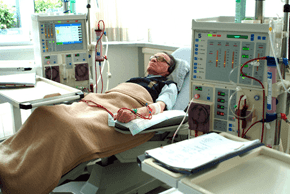 A team of highly experienced Surgical Specialists in a world class super specialty hospital in India which is affiliated with Safemedtrip.com have transplanted a donated left side of liver upside down so that it can fit and replace the patient’s right side of the organ. This is one of the most complicated liver transplant surgeries successfully performed in India for the first time in Indian medical history which has given a new lease of life to the patient. The patient was suffering from terminal liver failure and wasn’t expected to survive beyond a few weeks without a transplant. However, a suitable donor was hard to find. Left with no choice, his daughter (28 yr. old) and son (26 yr. old) decided to donate their liver as they had matching blood groups. However, there was a problem: both the children were small built and could not individually meet the requirement to save their father. That’s when the India’s highly competitive chief surgeon decided to conduct a “dual left lobe transplant”, where each donor had to donate only about 35% of their liver (left lobe) and then, these were transplanted into the recipient. Usually a Liver Transplant Surgery in US costs between $250,000 – $350,000 and in UK it may cost upto $450000. But in India at Safemedtrip.com affiliated hospitals Liver Transplantation Package usually ranges between US $50,000-$60,000. Previously, this kind of surgery was done in only 3 other centres in the world i.e. in South Korea, Brazil and China. Now India has also added its name to the list of most complicated surgeries i.e. “Dual Left Lobe Transplant (also known as Upside Down Liver Transplants operation). Safemedtrip affiliated hospital’s doctor who performed this surgery said, “Normally, an adult donates his right lobe i.e. 65% of the whole liver to another adult because that’s the amount the recipient needs to be cured. In this case, neither of the donors could safely donate their right lobe to their father. Instead, a new procedure had to be done, where the left lobes of both the donors were taken, which together sufficed the recipient’s need. Since the children lost minor part of their liver, they are also safe.”

But why was the liver put upside down? That’s a million dollar question!

In this case since both were left lobes, one of them had to be put upside down so that it could fit in as the right lobe. The liver is the largest gland in the body, which is divided into a left lobe (35%) and right lobe (65%). Both the lobes lie inverse to each other. This surgery was led by a World Renowned Surgical Specialist in India who led a team of 40 surgeons, anesthetists and OT staff for this complicated and long lasting procedure. The surgery took 16 hours, and was conducted in three operating theatres. For More Information Please visit this link : https://safemedtrip.com/medical-services/organ-transplant-in-india/liver-transplant-surgery-india.html