Leukaemia Cancer Treatment in India – In acute leukaemia, the condition progresses at a rapid and aggressive pace, and Treatment needs to be administered immediately 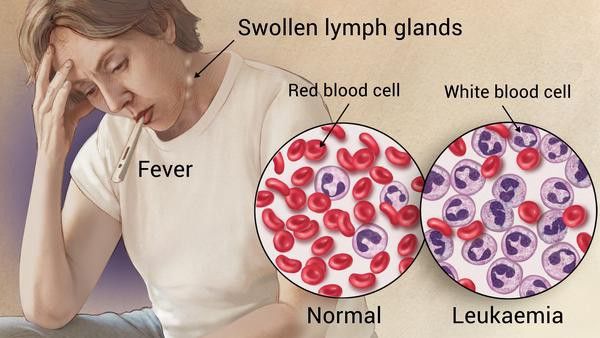 Cancer occurs when there is uncontrolled abnormal cell growth and development. It disturbs the normal life span of cells wherein they are formed, mature, carry out their intended function, die, and are replaced by new cells which are constantly regenerated in the body to maintain normal cellular function. Cancer represents the disturbance of this process. Leukaemia Cancer is cancer of the white blood cells.

The symptoms of leukaemia include:

Acute leukaemia Cancer prevents the affected bone marrow from producing stem cells that mature into adult blood cells. Instead it releases numerous immature blood cells called blast cells. The immature white blood cells begin to rapidly disrupt the normal balance of cells in the blood, limiting the presence of red blood cells or platelet cells in the body. This can lead to tiredness and other symptoms of anaemia, and also increase risk of excessive bleeding. The patient also becomes more vulnerable to infection as the white blood cells are not properly formed and thus ineffective in fighting bacteria and viruses.

The two main types of acute leukaemia are:

It is more common in older people, especially when over 50 years of age, and more common in males than females, though it is not clear why. The causes of acute leukaemia are uncertain, but known risk factors include

Exposure to high levels of radiation

Exposure to benzene, a chemical that is used in manufacturing and is also found in cigarettes The lack of healthy blood cells in the blood supply causes most of the symptoms of acute leukaemia, which usually begin slowly before rapidly escalating in severity as the number of blast cells in the blood increases.

The outlook for people with AML depends on the sub-type of AML, with some subtypes being more challenging to treat than others. The cure rate thus varies, and some sub-types have a 75 per cent cure rate, while others have a 20 per cent cure rate. The outlook also favours younger people as compared to older people. The treatment usually includes a combination of chemotherapy and radiation, or a bone marrow transplant in some cases.

ALL is the most common type of cancer found in children, though it is uncommon on an overall basis. Approximately one in every 2,000 children will develop ALL. The majority of cases develop in the age group of two to five year olds, and 85 per cent develop in children below the age of 15.

Induction: The aim of the initial stage of treatment is to kill the leukaemia cells in the bone marrow, restore the blood to proper working order and resolve any symptoms that may be present.

Consolidation: This stage aims to kill any remaining leukaemia cells that may be present in the central nervous system.

Treatment for ALL involves three stages:

The treatment of hematologic malignancies is rapidly changing, and primary therapy for leukaemia has advanced steadily over the past years. Biologic advances have led to a better understanding of drug resistance and the emergence of various targeted therapies, which have revolutionised the way in which leukaemia’s are treated. Some of these offer patients more treatment options with less toxicity.