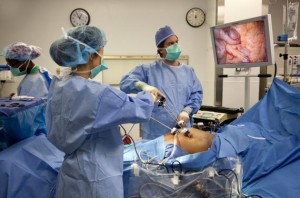 Patients who had the less-invasive procedure were less likely to need nursing home care, study finds.

Seniors who have minimally invasive laparoscopic surgery for colon cancer are much less likely to end up in a nursing home after being discharged from the hospital than those who have open surgery, a new study finds. One expert not connected to the research said the study adds valuable information for patients.

Laparoscopic surgery offers many advantages when compared to similar procedures performed through a large open incision.

In the new study, a team of researchers reviewed data on more than 9,400 patients over the age of 70 who had colon cancer surgery between 2009 and 2010. Of those patients, more than 5,700 had open surgeries, while about 3,700 had less-invasive laparoscopic procedures.

Patients who had open surgery were much more likely than those who had laparoscopic surgery to be sent to a nursing home after leaving the hospital, the team found, at 20 percent versus 12.5 percent, respectively.

There is evidence that laparoscopic surgical treatment for colon cancer is similar to an open operation in terms of outcomes from a cancer treatment point of view. According to the Cancer Institute, three-year survival and cancer recurrence rates are comparable for patients who have laparoscopic or open surgery for any stage of colon cancer.

The team also found that patients who had other diseases — such as diabetes, high blood pressure or heart disease — were more likely to require nursing home care after leaving the hospital.

For colon cancer patients in their early 70s who do not have advanced cancer or other major health problems, laparoscopic surgery may help prolong their lives and also preserve their quality of life, the researchers concluded.

Another expert believes that laparoscopic colon surgery is still underused. The procedure is not new. In fact, it was first done 20 years ago. However, the techniques had difficulty gaining acceptance among surgeons because of the concern over the safe and proper performance of cancer surgery and the challenging skill sets required.

Ample evidence has now accumulated that minimally invasive surgery for colon cancer can be both safe and effective in treating the cancer. However, even most recent surveys show that only 15 to 20 percent of the nation’s surgeons use laparoscopic techniques for colorectal surgery.