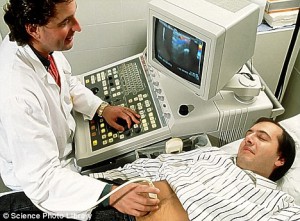 “Soundwaves could help 95% of prostate cancer patients … without affecting sex life”, was reported in the news. Its story comes from a small study that looked at an experimental treatment using high-intensity focused ultrasound (HIFU) to target areas of prostate cancer in men where the disease had not spread.

Standard treatments for prostate cancer often lead to undesirable side effects, in particular erectile dysfunction and urinary incontinence. Researchers found that a year after this experimental treatment, 89% of men still had erectile function and all were still continent. Ninety-five per cent of the men showed no evidence of disease on an MRI scan.

The results of this small study look promising. Men with early (localized) prostate cancer that has not spread can often live for years without developing life-threatening symptoms, and are often faced with a difficult decision about whether or not to have conventional treatment, which can have side effects. A treatment that can target areas of cancer without damaging healthy tissue might enable more men to have treatment for prostate cancer at an early stage.

However, it’s important to point out that this is an early “proof of concept” study and that a far larger trial is required to assess both its effectiveness and safety. This was a trial of a treatment for early (localized) prostate cancer, which has not spread to other organs or tissue.

What kind of research was this? This was an early prospective development study looking at a new treatment for localized prostate cancer called high-intensity focused ultrasound (HIFU).

Prostate cancer is the most common cancer in men, yet, as the authors point out, treating localized prostate cancer is difficult since the disease often progresses slowly and may not cause any symptoms for many years. There are several standard treatments for loc 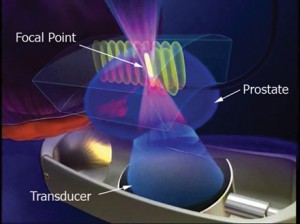 alized prostate cancer. Some involve treating the whole prostate with radiotherapy or removing it with surgery, and these can damage surrounding healthy tissue. The more destructive treatments of the whole prostate gland lead to undesirable side effects, in particular, erection problems (affecting 30-70% of men treated) and urinary incontinence (affecting 5-20%). One alternative for men at present is to have no active treatment but to undergo regular checks. This is known as active surveillance. The new treatment, says the authors, is less aggressive and able to target the cancer site rather than the whole organ.

What did the research involve? Between 2007 and 2013, the researchers recruited 42 men to their study. To be eligible they had to be aged 45 to 80 years and have been diagnosed with localized prostate cancer ranging from low to high risk. They also had to have had no previous treatment for prostate cancer or other conditions of the prostate and they had to be fit for a general anesthetic and for MRI scanning. At the start of the study, they were also asked about whether they suffered from erectile dysfunction or urinary incontinence.

In order for researchers to pinpoint the exact location of their cancers, all the men underwent two diagnostic techniques – a special type of MRI (magnetic resonance imaging) scan and a “mapping” or “template guided” biopsy.

The patients, under general anesthetic, then underwent the treatment with an HIFU device, a probe inserted close to the prostate through the rectum. The device emits high-frequency sound waves that heat the targeted cells to 80°C. Researchers ensured that general guidelines for all treatments were followed, in order to protect nerve cells and healthy tissue.

The men were followed up at one, three, six, nine and twelve months. On each occasion they were given a PSA blood test (which measures levels of prostate specific antigen, a chemical marker that can indicate the presence or recurrence of prostate cancer), and were given validated questionnaires asking about side effects. At six months they had a further MRI and a biopsy. Men who had a positive diagnosis were given further HIFU treatment. A further MRI scan was carried out after a year.

The researchers were primarily interested in whether the treatment was acceptable and in rates of side effects, in particular erectile dysfunction and urinary incontinence. Quality of life was assessed, and the researchers also looked at the progress of the cancer.

What was the Conclusion? The results of this small early trial are promising. It was a small observational study of 41 men. The authors refer to other ablative therapies as well as brachytherapy and image-guided radio surgery, which can be used to treat smaller volumes of prostate tissue while seeking to preserve function.

As an early “proof of concept” study the results will probably be used to support and design larger trials to assess both effectiveness and safety of HIFU compared to current best practice.