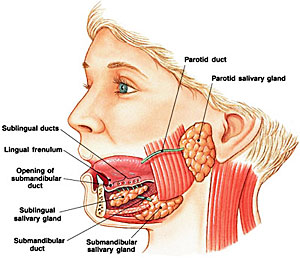 The symptoms that may indicate such cancers are painless and/or increasing swelling under the chin or around the jawbone, numbness in the face, inability to move muscles in the face and pain in the face, chin, or neck.

Surgery: During surgery, the goal is to remove the cancerous tumor and some of the healthy tissue around it . A surgical oncologist is a doctor who specializes in treating cancer using surgery. Types of surgery for head and neck cancer include:

Excision. This is an operation to remove the cancerous tumor and the margin around it.
Laser Technology. This may be used to treat early-stage tumors, especially in larynx cancer. Lymph Node Dissection. If the doctor suspects that the cancer has spread, the doctor may remove lymph nodes in the neck, possibly causing stiffness in the shoulders afterward. This may be done at the same time as an excision.

Reconstructive (Plastic) Surgery. This type of operation is aimed at restoring a person’s appearance and function of the affected area. If the surgery requires major tissue removal (for example, removing the jaw, skin, pharynx, or tongue), reconstructive or plastic surgery may be done to replace the missing tissue. 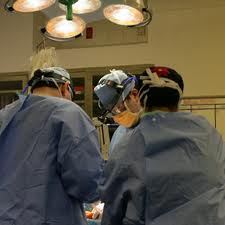 Minimally invasive surgical techniques are used when possible to remove tumors that are located near structures involved in sensory and physical functioning. In many cases, patients can recover more quickly when treated with minimally invasive surgery compared with traditional, open surgery.

Endoscopic Laser Surgery: This technique may be used to remove tumors in the larynx (voice box) or pharynx (throat) while preserving the structures involved in speech and swallowing. The surgeon inserts a thin, lighted tube called an endoscope through the patient’s mouth and into the throat. Surgeons remove the tumor using a special laser that is attached to the endoscope. Endoscopic laser surgery is often performed on an outpatient basis with a safe, fast-acting anesthetic that wears off quickly after the procedure.

Minimally Invasive Video-Assisted Thyroidectomy (MIVAT): A tiny video camera that is attached to an endoscope is used to remove thyroid tumors through a small incision.

Robotic Surgery: Tumors of the tongue and tonsils can be removed with the aid of small robotic arms that are placed in the mouth, avoiding the need to make a large incision or to split the jawbone.