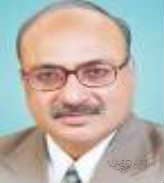 Dr. Sudhir K Kapoor is an Orthopedist practicing successfully more than 36 years. He is extremely skilled in Arthroscopy, Hip Arthroplasty, Trauma Surgery and Orthopaedic procedures. He has been associated with teaching since 1981. As a professor, he was associated with LNJP Hospital and MNMC, New Delhi, LHMC, ESIC, PGIMSR, New Delhi.

He had organized seminar on Orthotics and Prosthetics in Amar Jyoti Research & Rehabilitation Centre, New Delhi in 1992. He was the Treasurer of Delhi Orthopaedic Association, 1996-2003.

He was the UG & PG examiners for various Universities since 1996 and MCI inspector since1998. He has organized various important conferences that include 3rd International Conference on Trauma & Critical Care held in MAMC in 1999, Annual Conference of DOA & BLS/ATLS Workshop in 2005 and basic Spine & CTEV Workshop during IOANCON at LHMC, in 2006, Cadaveric Knee Arthroscopy Workshop in LHMC in 2007 and14th IOAICL & Cadaveric Fracture Fixation Workshop, 2008.


Check out other leading Orthopedic Specialists in India…Click Here