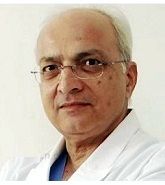 Dr. Rajesh Kumar Ahlawat is the Group Chairman – Institute of Urology & Robotic Surgery . He lead the way to establish four successful Urology and Renal Transplant programs in India at Sanjay Gandhi Postgraduate Institute of Medical Sciences (Lucknow), Indraprastha Apollo Hospital, New Delhi, Fortis Hospitals (New Delhi), and Medanta Medicity (Gurgaon). His publications and presentations at national and international forums have focussed on minimally invasive Urology. An accomplished Endourologist, and a Laparoscopic and Robotic surgeon, Dr. Rajesh Kumar Ahlawat has been a Guest Faculty at most Endourology and laparoscopic workshops in India. He has the largest single-unit experience in the world for conducting more than 1200 Laparoscopic Donor Nephrectomies.

At Medanta, he has successfully led minimally invasive, nephron-sparing renal surgery, prostate cancer surgery and bladder cancer surgery programs. An academician at heart, Dr. Ahlawat initiated the Urology training M.Ch. and D.N.B. programs at all previous institutions he was previously associated with. He was awarded with the prestigious Chakraborty Fellowship by the Indian American Urological Association in 1992 and the PN Berry Fellowship in 1995. During his stint at the Institute of Urology and Nephrology in 1995, the University College London Hospitals (UCLH), United Kingdom conferred the title of Honorary Lecturer upon Dr. Rajesh Kumar Ahlawat. He is currently a member of Board of Directors of the Endourology Society. He has been the Assistant Editor of the Indian Journal of Urology in past, and is currently a part of its editorial committee. He is an important part of many review teams of various national and international urology-based journals.