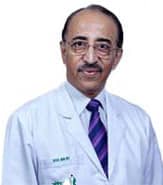 Dr. Anil Behl is a renowned and skilled Plastic Surgeon with an experience of 38 years.

His area of interest covers complex reconstructive and aesthetic surgeries and burns care.

He is especially trained in hand surgery, Craniofacial Surgery and Aesthetic Surgery.

After graduating with MBBS from Armed Forces Medical College, Pune, he pursued MS in General Surgery. Later he did MCh in Plastic Surgery from the same college.