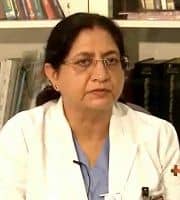 She had been essential in starting the department of radiation oncology at Artemis Health Institute in 2007 and Rajiv Gandhi Cancer Institute in 1996. She has done extensive research in her field and has also authored various publications in Journal of Cancer Research and Therapeutics, Brachytherapy Bulletin of Indian Brachytherapy Society, Journal of International Medical Science Academy and TheHealthSite.com etc.

She has a very long list of achievements starting from National Education Scholarship in 1977, DGHS Scholarship for MD Radiotherapy in 1985, Himachal State Scholarship for MBBS in 1978 to National Excellence Award for Humanitarian Work in Cancer back in 2002. Dr Tejinder Kataria’s valuable contributions to the medical field are honoured through prominent awards like Marquis Who’s Who in the World and Best Paper Award in AROI in Breast Irradiation in 2010.