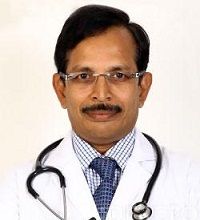 Dr. Rama Mohan Reddy Vada is a well-known, skilled and experienced radiation oncologist in India. He has a great experience of 29 years in this field. He holds the Guinness World Record for the largest number of patients (2,790 patients) screened for breast cancer (the patients simultaneous performed self-examination for breast cancer in Guntur on 20th February 2016). He encourages special drives by conducting special awareness camps, health talks and programs for the purpose of early detection of cancer to make it curable by providing the best possible treatment with precision. He has keen interest towards research and has several publications to his credit.