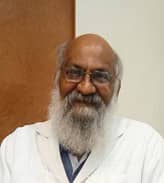 He received Haldar Memorial Oration Award by Association of Radiation Oncologist of India in 2010. Dr. Nagraj completed his MBBS from Karnataka University in 1975, followed by doing DGO from College of Physicians and Surgeons in 1977.

He also did MD in Radiation Oncologist from AIIMS New Delhi in 1980. He has previously worked with reputed hospitals such as Bombay Hospital, Tata Memorial Hospital, and several others.